These Kids Got Class! A Pop-Up Restaurant Experience - Archived 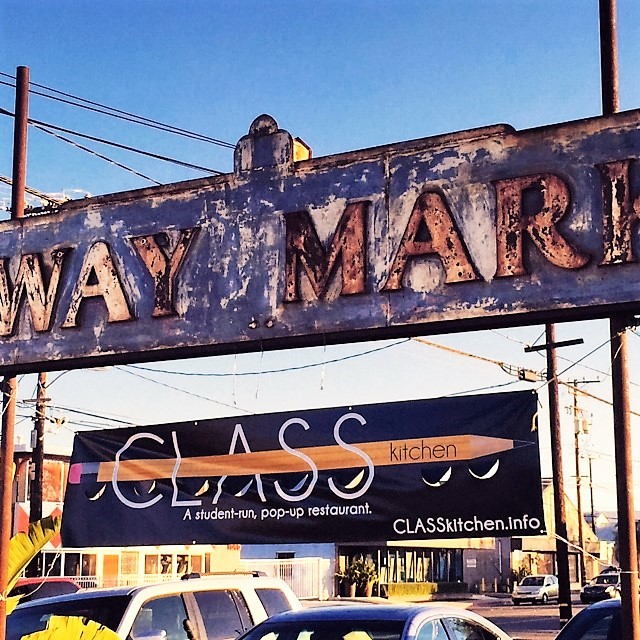 This content has been archived. It may no longer be relevant.

I’ve known Austin since he was 10, and even back then, I knew he’d be going places. He had a sharp mind, creative energy, excellent people skills, and a determination and focus, rare in young people these days. So when his mom told me he was opening up a restaurant at age 17, I wasn’t surprised. Young Austin was always interested in food. I remember during play dates, he would let the younger kids play while he chatted with the moms about food and how they made it and so on. I remember bumping into him at different locations during the food truck craze too.

Flash forward: Austin January an incoming senior at the Orange County High School for the Arts teamed up with fellow OCHSA culinary program-schoolmate Noah Rosen to open a pop-up restaurant called Class Kitchen. The boys put in their own money into the businesses and had additional funding from a Kickstarter campaign.
I made a reservation for the last weekend of the Pop-Up restaurant – which as it turned out (due to popular demand), was the second to the last weekend since they extended their run for another weekend.

The restaurant was set up in an existing breakfast spot called Waffleholic, in a rather, hidden spot in Costa Mesa. My first impression, funky! The buildings surrounding Waffleholic are really cool, in that industrial, crafty chic way. A live jazz band (from OCHSA’s music program) was playing for tips. The hostess and the servers all attend the prestigious High School for the Arts too. Music students from the Orange County High School for the Arts provided the music.

And then the food came – and that’s when I was truly impressed. Take a look at this video I created of my CLASS KITCHEN dining experience.

MT: A few days after the end of CLASS Kitchen’s pop-up run, I asked the wonder duo behind the project about what they learned.

Austin: “The most important lesson I learned was that a Chef should always expect the unexpected. Every weekend Noah and I were faced with a new challenge that we did not plan for. Whether it be a short staff for one night or an oven breaking 30 minutes before service, it was always important to persevere and improvise to get through the night. “
Noah: “Biggest lesson I learned would be planning and the significance of a plan of attack for all the action and changes you undertake.”
What did you learn about yourself on a personal level?

That’s me (lower right, seated) with a friend Peggy Fowler and CLASS Kitchen’s Austin January flanked by his proud parents, Eric and Maria.

Austin: “Personally, I learned to break out of my comfort zone when talking with guests over email, calls, and in the restaurant. Usually I am cooking and focusing my efforts in the kitchen, but in CLASS Kitchen, I assumed the role of the General Manager. While I still helped in menu development and food prep, during service, I had to learn to talk with guests and become comfortable with public speaking. Although it seems like a small lesson, for me, learning how to interact with customers in a professional and kind way was very important.”

Noah: “I proved to myself how much I love the culinary arts and no matter the struggles, conflicts, long days and nights, or ups and downs, I loved running my restaurant and working in it too.

MT: Would you open a pop-up restaurant again in the future?
Austin: “I love the idea of a pop-up restaurant, but in my senior year, I would like to focus more on school and the culinary internship I will be working in. Later on, in college, I could definitely see myself opening a small, brief pop-up to display my culinary skills.”

Noah: “Yes, I would certainly do a pop-up restaurant again! Not just because I feel the wealth of knowledge I’ve learned can be furthered, but also to challenge myself. It would also be fun to run a business again even if it’s temporary and short-term (as that is the nature of a pop-up). The challenges we faced and the things we accomplished through hard work were very rewarding. “