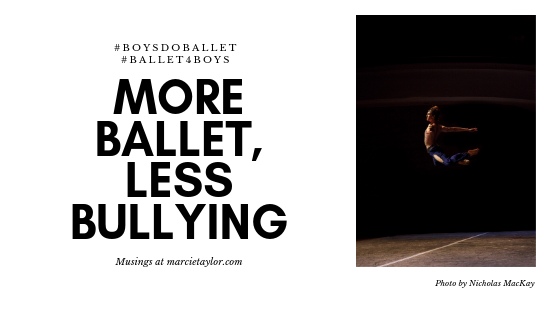 UPDATE: The day Lara Spencer apologized on Good Morning America for making fun of a young prince and his study of ballet, an amazing thing happened outside their New York studios. Watch here:

By Friday morning, the ballet pages I manage were abuzz with activity and outrage. I found out it was because on the TV program “Good Morning America,” host Lara Spencer seemingly mocked a little boy who was interested in ballet.

To me, it definitely looked like Lara and the others on the show laughed when they found out that young Prince George (yes, Future King of England!) was going to take ballet lessons. It was ignorant, insulting and straight-up mean. If they could make fun of a prince wanting to dance ballet, what would they do to other children who expressed an interest in the centuries-old art? There was nothing even funny about the news report. If anything, it was impressive – I mean, how many six-year-olds do YOU know who are studying the following subjects: “religious studies, computer programming, poetry, and ballet?”

In response to the news, I posted up images and videos of danseurs that had just performed at Festival Ballet Theatre’s recent gala.

On my personal page, I cut together this video highlighting some very talented boys/men who do ballet!

Meanwhile, the internet was on fire, and #princegeorge #ballet4boys was trending. Dancers from around the world, young and old, celebrities and non-celebrities shared their stories:

Everyone is demanding a real apology.

In the words of the iconic Debbie Allen: “Lara Spencer and Good Morning America. you owe the Royal Family and the dance world an apology. “

Lara Spencer of Good Morning America apologized on camera for the comments she made about Prince George studying ballet. She sat down with dancers Travis Wall, Robbie Fairchild, and Fabrice Calmels. It seemed heartfelt enough and the dance community is a forgiving lot. So all’s well that ends well.

In my opinion, the whole situation just highlighted the ignorance of many people and the low regard our culture has not only for dance but for arts as a whole. This Washington Post article goes into it deeper. Here’s an excerpt: “It’s admirable that the future king of England gets to study ballet as part of his schooling, and that should be valued, said former New York City Ballet principal Philip Neal in an interview with The Washington Post. As a victim of bullying who found life-changing solace in the dance studio, he was disturbed by Spencer’s attack on arts education.”